2021 was an annus horribilis for Pete Phipps of Wadhurst. A professional musician and songwriter since his teens, Pete has drummed on chart topping records, appeared on Top of the Pops, toured the world and recorded with a host of well known acts including The Eurythmics, Boy George, XTC and Mike Rutherford of Genesis.

It’s a hard life and physically punishing on the body yet, aged 70, Pete continues to perform on stages across Europe. When not in the studio or on the road, Pete is a respected teacher of Tai Chi and a keen tennis player, so a man who leads a highly active lifestyle. 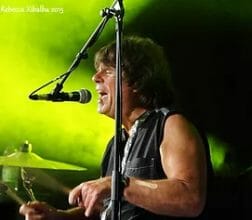 It was after a gruelling twenty-five date tour of Germany that Pete really started to feel pain in his hip. He was referred by his GP for a consultation at The Horder Centre in November 2020 following which he was advised he needed his right hip replacing. Sadly, before he was able to proceed with his treatment, he was hit by the news that he also had prostate cancer and his hip replacement would have to be deferred until the cancer had been treated.

Months of hormone treatment and radiotherapy followed until the summer of 2021 when Pete, to his great relief, was told the treatment was successful and his cancer cured. By this time his hip was causing great pain and his mobility was impaired, significantly compromising not just his quality of life but also his livelihood.

‘I was in agony when walking and in pain even just sitting down. My fellow musicians were beginning to get back to work but for me getting behind a drum kit either for pleasure or profit was completely out of the question.’

In August 2021, Pete had a new consultation at The Horder Centre with Consultant Orthopaedic Surgeon and hip specialist Mr Syed Ahmed and was scheduled for hip replacement surgery on 5th October, eight weeks later.

‘From the moment I arrived at the hospital I was made to feel relaxed. I have never had an experience like it before. It was like checking in at a hotel and everyone was so friendly.’

Pete’s surgery went well, and he was released after a two night stay, He had hoped his recovery would go equally smoothly as he was due to perform at a big 70s weekend festival in late November. However, despite committing to his recommended physio programme he was still in pain, his leg swollen and his movement compromised so another drummer had to stand in.

‘I tried my best to get ready for the show, but knew getting behind a drum kit was beyond me. I was still walking with a stick and my leg was swollen. I had dates booked at Butlins in March but actually began to wonder whether I would ever play the drums again.’

Over the next weeks, Pete’s recovery progressed and his mobility improved. In February 2022, over a year since his diagnosis, he finally got behind a drum kit. And just four weeks later he took to the stage at Butlins for a sell-out show. The audience lapped up the instantly recognisable and pounding rhythms delivered in Pete’s inimitable style.

‘I felt great to be back where I belong, and I would like to thank Mr Ahmed and the amazing team at The Horder Centre for making this possible. I am sure Pete’s legions of loyal fans would too!’ 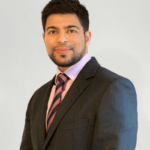 Mr Ahmed graduated from University of Sheffield’s Medical School and completed his Higher Surgical Training in Trauma & Orthopaedics in Kent, Surrey and Sussex. Mr Ahmed ensures that he uses the latest in hip and knee technology and has a specific interest in enhanced recovery after hip/knee replacement and minimally invasive surgery.

Hip Replacement at The Horder Centre

90% of patients experience a large reduction in hip pain following a total hip replacement, which allows them to return to their normal daily activities.